Mike Turner is a career politician

I ran against him for Mayor of Dayton back in 1993. I’m partially responsible for his long political career- in that many voters got confused between the two tall new guys, with hair and glasses.

The difference was I said things of substance, he didn’t, and hid the fact that he was a right wing republican.

He’s loved by PRO-LIFE, and He’s LOVED BY THE NRA

He had an A rating from the NRA before they stopped rating candidates.
He has an A+ Rating from the Susan B. Anthony Pro-Life movement.
I’ll never pass either of those tests- see my strong positions on Gun Control by clicking on my ad below. 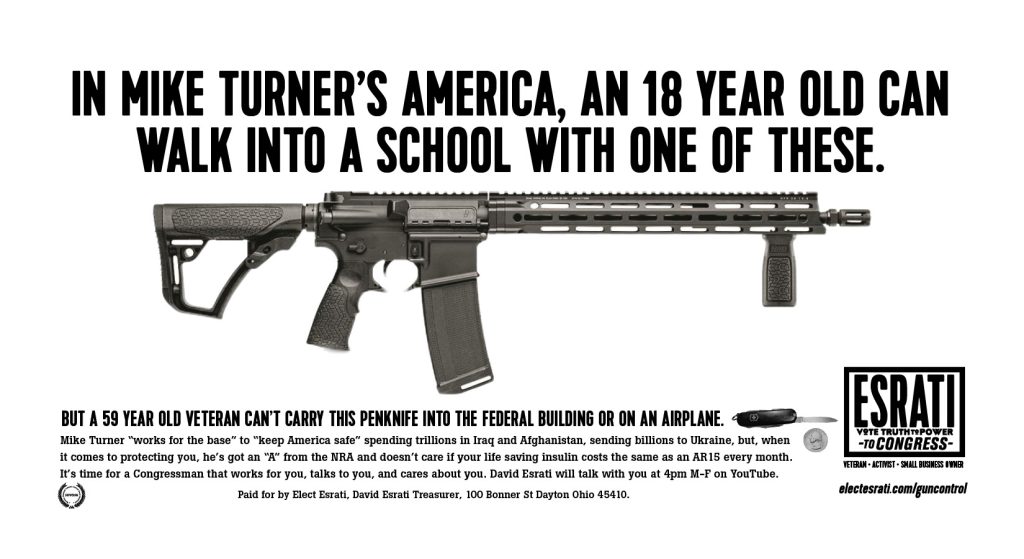 I’m an American first, a Democrat Second.
We have to work together.

PEOPLE WHO KNOW ME KNOW THAT I’m not a normal politician- I’m blunt, honest, and trusted.

And I own an Ad agency, so I can be more precise in my targeting, making your dollars go further, activate more voters, and pump ads faster than any candidate Turner has ever faced.
Here’s an old one.

The District is still RED

And it will be until the Ohio redistricting commission does it’s job for the 2024 cycle. However, the party has never sent a candidate who is as prepared to run against Mike Turner as me.
I’ve been there from his political start. I’ve exposed his scams- giving government contracts to his wifes firm, how PAC’s hired her firm, how he’s set up the Dayton Development Coalition to keep pounding the message that “Mike Turner works for the base” and if he was to lose- the base would leave.
It’s almost embarrassing how little he does for his voters.
He’s never held a town hall.
I’m livestreaming 5 days a week- to make sure I’m in touch with voters- and will continue the practice once in Congress.
It won’t be easy to win- but if anyone can take him on it’s a US Army paratrooper.
I don’t go in to battles to lose.

But- I need support. I can make the most effective ad campaign you’ve ever seen for half a million. That’s a quarter of what the last candidate spent.
I’ve got the tools, the ad tech- and the knowledge on how to win.
What I need is your backing.
Please consider backing the most unconventional warfare trained candidate in our countrys history- an ad man.
There are people who are already lining up to buy tickets to watch this show.
Get your popcorn ready.