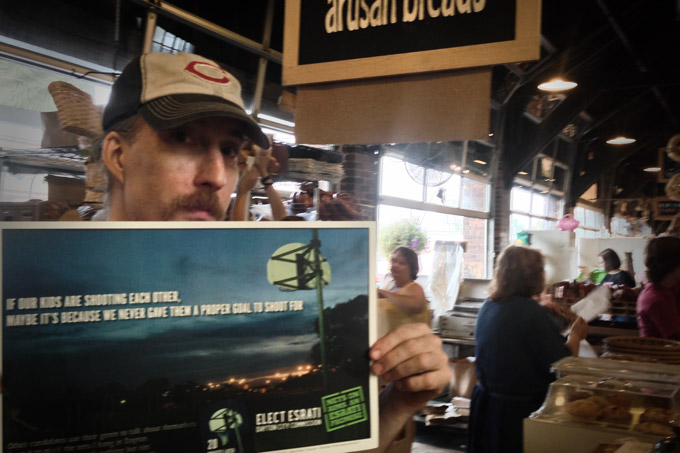 If you’ve been to the Second Street Market, you’ve seen the lines for Rahn’s bread. He bakes for restaurants around town – including Olive, an Urban Dive and Submarine House– you can read more about his breads on his site: Rahnsartisanbreads.com. (Full disclosure- my company, The Next Wave hosts his site and does a little printing for Rahn, we’ve also been friends for many years).

His bread is fantastic- my favorite is the Abruzzi, an Italian sourdough round- or the baguettes.

He has read my blog, www.esrati.com for years, often in the middle of the night as he’s baking. After my office got broken into, he showed up at 7:30 am with a bag of bread and scones- in his box truck, to try to make me feel better, he’s that kind of friend.

His bakery is on Kiser Street in Old North Dayton, he pays taxes in Dayton, but lives in Enon and can’t vote for me. Supporting kids in Dayton, by supporting my campaign shows you how valuable small businesses like his are to our community. If you want to support me and my efforts, buy his bread- and we’ll both be happy.

Rahn’s is in the Second Street Market, across from the Western most door on the parking lot side. He sells bread Thur-Sat. I usually show up around 9:30 every Saturday for my bread. See you there.