Does the Democratic Party care about winning elections? 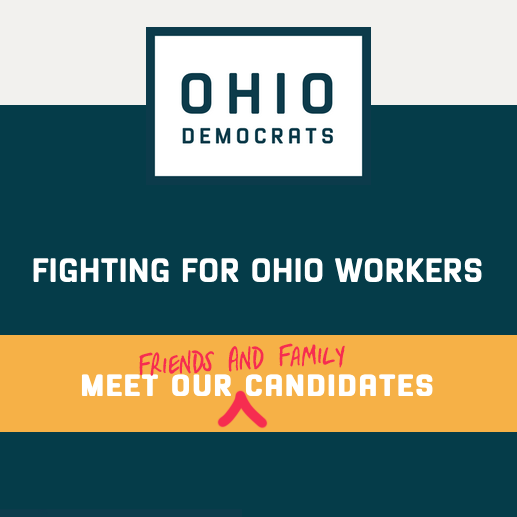 The Ohio Democratic Party finally responded to an email I sent.


It wasn’t on letterhead. It’s undated (attached in an Email to me from John Tannous, “Party Affairs Director, ODP” dated 8/30/22, 6:36 PM) They claim they aren’t a public entity that has to follow the Ohio Sunshine Laws (really? Because, real democrats believe in sunshine).

I’m not on their website because I somehow don’t meet their standards- which seem to be kinda nebulous.

I’m running in an unconstitutionally drawn district that includes 3 counties. They claim that I had a “right of appearance” before the May primary- and because the county didn’t make an endorsement, they won’t either. Something about the information in their questionnaire.

Since I don’t believe in primary endorsements, in my world that’s up to democrats voting in an open primary – not just the folks on the central committee.

I’m wondering since I never filled out a document for the Greene or Clark County parties- why the Montgomery County party is the only one that counts?

They go on to say:

We have also received multiple credible accounts of past conduct on your part that would make us hesitant to do so, such as harassing Democratic candidates, elected officials, and leaders; supporting Republicans; and using inflammatory and offensive language.

Hmmm, really? Like harassing current Montgomery County Dem Party Chair Mohamed Al-Hamdani while he illegally conducted School board business before he was sworn in? Or conducted an illegal private bus tour of schools to close? Really? Because I made a video- called “Good Bye Sunshine” that clearly shows Dayton Mayor Jeff Mims not entering the buildings because he knew it was illegal.

As to supporting Republicans- Isn’t that what the near brawl was about at the end of the last Montgomery County Democratic Party meeting?

The fact that my business is advertising and I serve all Americans, I’ve done work for Republicans- ones I know, who are my friends. The Party has turned down every offer of assistance I’ve offered over the last 25 years. Am I allowed to deny service to people based on their political leanings? How is that different from denying a wedding cake to a gay couple?

As to inflammatory language, I guess what’s OK for Beto- isn’t ok for me.

The last part of the letter is interesting:

Finally, the ODP is NOT required to put you on our website or include your name on sample ballots if it doesn’t choose to do so. There have been dozens of examples over the years that candidates, even though they are the only Democrat running for an office, have been left off official ODP publications. The decision is entirely at the discretion of the ODP Chair and not subject to any statute or law.

Apparently, winning a primary, asking the people to decide doesn’t matter to them.

Either elections matter, or they don’t.

The two other candidates who they are leaving off the site- one won a close primary, the other, had his “establishment” candidate drop out after he’d raised half a million to run- and he quit after early voting started.

But I’m sure Danny “DropOut” O’Connor would have been on the Dem party website.

So am I a Democrat?

If you were at the shitshow of the Montgomery County Dems party meeting which almost ended in a brawl, Mohamed told me- I’m not a member of the party.

Apparently, the Republicans have different interpretations of the law.

A candidate for Secretary of State, who used to be a Republican, tried to run as an independent, where the standard for signatures is much higher.

The Republicans claimed successfully, that the person was still an R- and the 5000+ signatures didn’t matter.  It’s amazing how we count signatures in Ohio- it’s overseen by the dems and the republicans- not the independents/non-aligned folks who out-number each of the parties.

Please note, in Montgomery County the Board of (S)Elections routinely invalidates at least 20% of the signatures, her total of 5,010 would never fly- and the Secretary of State ruled that she was 7 short. Apparently, no one informed her, that by locating the voters and getting a notarized affidavit of intent of those voters, the signatures can be counted (it’s known as the Esrati rule in Montgomery County after I learned it from Jose Lopez who used that method in Miami County).

But, again- Am I still a Democrat?

Tim Ryan is out on the campaign trail distancing himself from some of the Democratic initiatives – and I don’t see the party backing down on their endorsement.

Apparently, the Democratic party is backing no one against Mike Turner.

If this doesn’t make you mad, I don’t know what does.

Their failure through 10 elections to find a candidate that comes within 14 points of him should tell you something about the party.

It’s not a reflection on me.

Here’s the last 10 failures- and I believe the party included all 10 on slate cards, on their site, etc.

Even Desiree Tims who outspent Turner, couldn’t even make him break a sweat.

If I had the $400K the DCCC wasted on helping a Trump candidate beat a patriotic American, Rep. Peter Meijer, who voted to impeach Trump, I could win.

Except, for the fact, that I don’t think I want to associate myself with people who support Trumpers- or Turner.

So, maybe I’m not a “Democrat”- maybe I’m just Veteran, Activist and Small Business man who actually has integrity.

And maybe the political parties in Ohio should have some of their powers stripped, our Boards of Elections de-politicized, so that the majority of voters- those who refuse to align with one party or another- have a real voice in who gets on the ballot and who doesn’t. Because right now- it looks more like a “Friends and Family” organization than a group that wants to win elections and support democratic ideals.