“I wasn’t taking my meds as prescribed and I’d been drinking and I’d lost it,” John “Sully” Sullivan quietly recalled Friday afternoon.

“I was suicidal. I wanted to end my own life and I’d thought of doing it with my car. Just hitting a viaduct or a light pole.”

According to a recent Veterans Administration study, 20 veterans a day die by suicide.

But before he joined those statistics, a flicker of sanity redirected Sullivan: “I kept thinking of my two boys and I couldn’t do it. I couldn’t die like that. And that’s when I parked my car on the side of the freeway.

“I was frantic and started throwing everything from the trunk out into the grass. All of my golf clubs were scattered out there and all of a sudden I was like, ‘(Expletive) It!’ I grabbed a club, started teeing up balls and hitting them down along the bushes.

A state trooper arrived and ended up arresting him on several charges. He wound up in the Summit Behavioral Healthcare facility in Cincinnati — for nine months.

That became just one of the numerous incidents in his three decades-long mental health battle because of a hereditary bipolar condition. It has landed him in numerous emergency rooms, mental health facilities and, sometimes, jail.

Through it all, he often has been retrieved from the personal wreckage, patched back up and nurtured by an unwavering group of friends, people like Bill Daniels, the co-founder and owner of Dayton’s Original Pizza Factory; David Esrati, a fellow veteran and Huff-n-Puff hockey player who is running for the U.S. Representative from Ohio’s 10th Congressional district; Jim Butler, the former speaker pro tempore of the Ohio House of Representatives; Piqua attorney Enrique Rivera-Cerezo, who helped Sullivan pro bono; Dan Curran, the former University of Dayton president; the Miami Valley chapter of the Blue Star Mothers of America and so many others.

While his sports dreams, his marriage and many other things were derailed by his illness, Sullivan’s inner fiber of goodness was not destroyed.

And that was on full display Friday as he and 14 other volunteers with the Food for the Journey Project handed out 250 free lunches at the East Dayton Fellowship Church on the corner of E. Third Street and Garland Avenue.

Although a massive presence at 6-foot-1 and 330-plus pounds, Sullivan exuded a warmth and kindness to everybody — from the grizzled, down-on-their-luck men and graying senior citizens to a young mother with four small children — who came to eat.

“John is magnificent,” said Chuck Wourms, the executive director of Food for the Journey, the Beavercreek-based mobile kitchen that sets up at different locations around the city four days a week and sometimes more.

“John interacts with everybody — he says ‘please, thank you, how you doing?’ — and he’s a real gentleman. He’s in touch with his humanity.

“He’s dealt with a lot in his life and he knows everybody can struggle for one reason or another.”

Sullivan grew up in Hudson, where his dad — a World War II veteran and private pilot — was his rock. He said his late mother battled bipolar disorder, as does his older brother now.

He learned to skate at age 4 and eventually was a standout in Mites Hockey in the Cleveland-Akron area.

The family moved to the Centerville area in 1986, and a few years later John was playing football for legendary coach Bob Gregg. But when it came to hockey, he trained and played for a Triple A team in Indianapolis.

That meant jumping into the family minivan for the four-hour round trips, often after first completing football or baseball practice at Centerville.

A bastion of hockey development, it’s had more than two dozen players drafted by the NHL and hundreds more have gone on to college hockey.

Although he had accepted a full ride to play hockey at Miami University, he reconsidered when a Culver teammate’s dad — who was a football coach at the Air Force Academy — suggested he’d be great in the Falcons’ program.

Although hampered by injuries, he played 60 games for Air Force and was hoping to get a shot at professional hockey. But everything changed during his final season as a cadet.

“I went nuts,” he said. “I had my first manic episode.

I’d seen my mom go through it — she had it real bad — and I’ve seen my brother when he was sick, too. But I didn’t really understand it then.”

The Air Force sent him to Wright-Patterson Air Force Base for treatment and discharged him in November 1994.

“It was heartbreaking,” Sullivan said. “I had been there 3½ years and was invested. I wanted to graduate.”

After leaving the Air Force, he said he was wrongly told he would not qualify for veterans’ treatment or benefits because he’d been a “trainee.”

He worked in insurance, was married for eight years to a woman whose son Jake he helped raise and then came son John Jr., who is now 25.

Sullivan did play hockey in the Huff-n-Puff league for a while, and it is that community that has especially buoyed him in his toughest times.

Manic episodes became more severe and with no sustained medical monitoring, his life became a roller coaster. He once spent 14 months in the Twin Valley psychiatric hospital near Belmont High School.

He said his aging father visited him every evening, always bringing him something to eat from Burger King, Taco Bell or Wendy’s.

His father passed away in 2003 and Daniels thinks that further unmoored Sullivan.

Daniels, who also played in the Huff-n-Puff league, employed Sullivan at his pizza eatery. Although there were some ups and downs, especially when Sullivan went off his meds because they made him tired and ended up wrecking an apartment or running up a bar tab, most of those who worked with him or were close to him recognized his innate goodness.

“I know when I’m sick I can be a royal ass—-, but they know that’s not the real John Sullivan,” he said. “That’s someone who is mentally ill and needs help. And at the end of the day, they realize I’m a good person who is worth helping out.”

One of his biggest champions is Daniels.

“The most poignant thing about John is that he’s had to have days when he was having lucid moments and he realized where he had been at one point in his life,” Daniels said. “He was the real deal as an athlete, just an amazing hockey player.

And he had to have a real intellect to be in engineering at the Academy.

“And then he loses all that because of the hand he was dealt.”

‘It takes a village’ 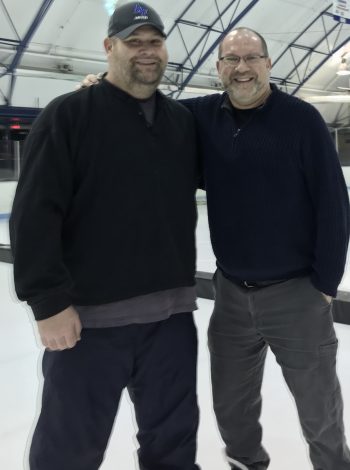 John Sullivan and David Esrati on the ice

Daniels introduced Sullivan to Esrati, who said “for me it primarily came down to the fact that no veteran leaves another behind.”

Esrati reached out to then- State Rep. Jim Butler, another vet, who he said “worked to get the people at SSVF (Supportive Services for Veteran Families) to realize (Sullivan) was a veteran.”

He had signed the Oath, collected a stipend from the Air Force, and others who attended service academies and were discharged for health reasons were designated vets.

The “it takes a village” effort of people helping Sullivan included Rivera-Cerezo, who got some of the charges of the I-75 incident lessened because of the mental health issues; the Blue Star mothers who furnished the kitchen in a house Sullivan got; and a woman who’d lost her veteran son to suicide and began to clean his home.

When Sullivan flew to Maryland after his brother was locked up after a mental health incident of his own, Curran drove over from Philadelphia and chauffeured John for an entire day, driving him to a Delaware shelter to pick up his brother’s dog and then returning him to Philadelphia and putting him up in an Airbnb.

Esrati became Sullivan’s power of attorney, helped him get his overdue VA funds and treatment and got his social security restored. He helped him buy the house in South Park and get a young German Shepherd — named Brutus after the Buckeyes’ mascot — as a companion.

Sullivan now takes 15 different medications and Esrati doles all but one of them out to him twice daily. He goes to dinner with him on occasion and is often there for the meltdowns.

“I can put on a face that says I’m all right, but when we part ways there are times it can go back to a real (crap) show,” Sullivan admitted.

But his world is so much better now, especially since at one point there had been talk of institutionalizing him.

“David has changed John’s life,” Daniels said. “John is not going to be homeless again and he has continuity of care because he now is getting his disabled veteran benefits.

“And there’s a societal benefit, too, because he’s not going to be moving around from mental hospital to mental hospital or even jail because of an illness he inherited.”

“Without David, I might not be here anymore,” Sullivan said. “He’s been wonderful for me.” 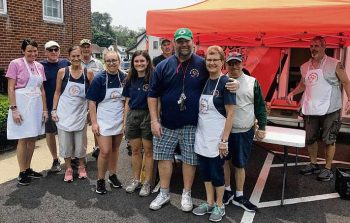 Sullivan now helps others by volunteering with the Food for the Journey Project, a 501(c)(3) organization that, as it states, “offers food and dignity to families, the elderly, the isolated, and the marginalized.”

On Mondays, Sullivan picks up the food for the week at Gordon Food Service in Trotwood and delivers it to FJP warehouse in Beavercreek.

On Thursdays he helps in the group’s mobile kitchen on Xenia Avenue and Fridays he prepares lunches at the East Dayton Fellowship Church.

I was taught compassion for people, and I see their struggle even better now because I’ve been through some of that.”

“To me, this is really rewarding.”

Esrati understands some of what the 50-year-old Sullivan is experiencing: “I know he’s embarrassed by many of the things that happened, but he understands that by talking about it, he may help other people.

“And what’s rewarding to all of us is seeing him having a life again.”

As for those glory days long past, Sullivan said the constant moving, the meltdowns and the other instabilities have resulted in having few photos from back then. 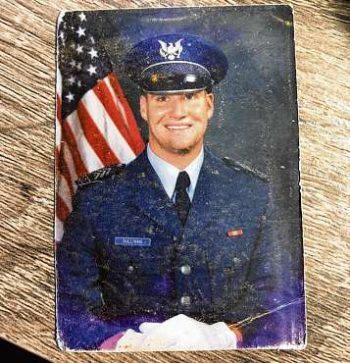 John Sullivan at the U.S. Air Force Academy in 1994. He is a junior in this picture and a starter on the hockey team.

He said his son Jack keeps a picture in his wallet of him in his third year at the Air Force Academy.

The photo shows a handsome, 22-year-old cadet with a dimpled smile, blue uniform and white gloves.

There’s a U.S. flag behind him and a seemingly unbounded future out in front of him.

The old photo now is getting flimsy and has a crease in it.

“I tell him to take it out of his wallet,” Sullivan shrugged.

“It’s the only copy I have. It’s the only picture I have that shows who I was.” As he was telling you this, he was sitting in the church basement. He again was wearing gloves — this time latex — and a smile. If there were dimples, they were hidden by his beard.

For the first time in years, he can see a future again. And Friday that first meant getting back to preparing the meals for the scores of hungry people waiting upstairs.

As Sullivan returned to work alongside the other volunteers, that image was as strong as the one in the worn 1994 photo.

It also told you who he was.